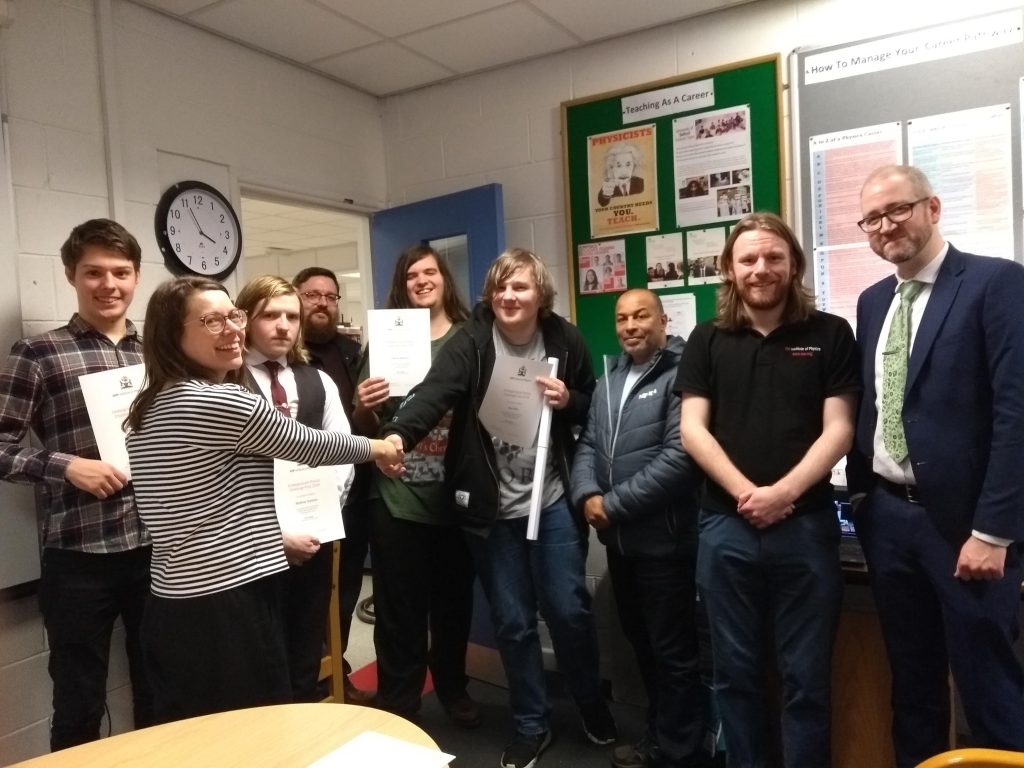 Physics Students from UCLan have won a “Physics Challenge” competition against other Universities in a prestigious event that is organised by the UK & ROI’s professional body, the Institute of Physics (IOP).

The challenge was to build an Analogue Voltmeter without using any pre-formed parts, with the rules also stipulating that it must include an elastic band. This requires a knowledge of theoretical electro-magnetism, as well as considerable practical skills, such as winding conducting coils in a magnetic field.

Hosted at the University of Salford, other teams apart from the hosts and UCLan included the Universities of Manchester, Nottingham and Northumbria.  The team had to pitch their design to a panel of judges (that included an Industrial Scientist) during a Demonstration and Poster session that was followed by a test of the Voltmeter for accuracy.

In addition to winning the top prize of an expenses paid trip to a Science Park, that includes being personally taken round the various companies, the team also won the prize for the most marks as voted by the students from the other teams (a Peer-Review prize).  All of the team had successfully come into UCLan via our Physics Foundation level.  The competition is only open to 1st year students taking degrees accredited by the IOP.

Professor Derek Ward-Thompson, Head of School of Physical Sciences and Computing said “This is an excellent result. There are a number of reasons why I am particularly happy: we have never won before; we beat 2 Russell Group Universities; and our team was made up entirely of students who came through last year’s Foundation Year Entry. This really demonstrates the calibre of our students.”

The students on the UCLAN team were Matthew Teasdale, Adam Ward, Patrick Williams and Kurt Allen. The team supervisor was Dr Joe Smerdon, and the Physics Course Leader who organised the UCLAN internal qualifier heats was Dr Tim Mercer.