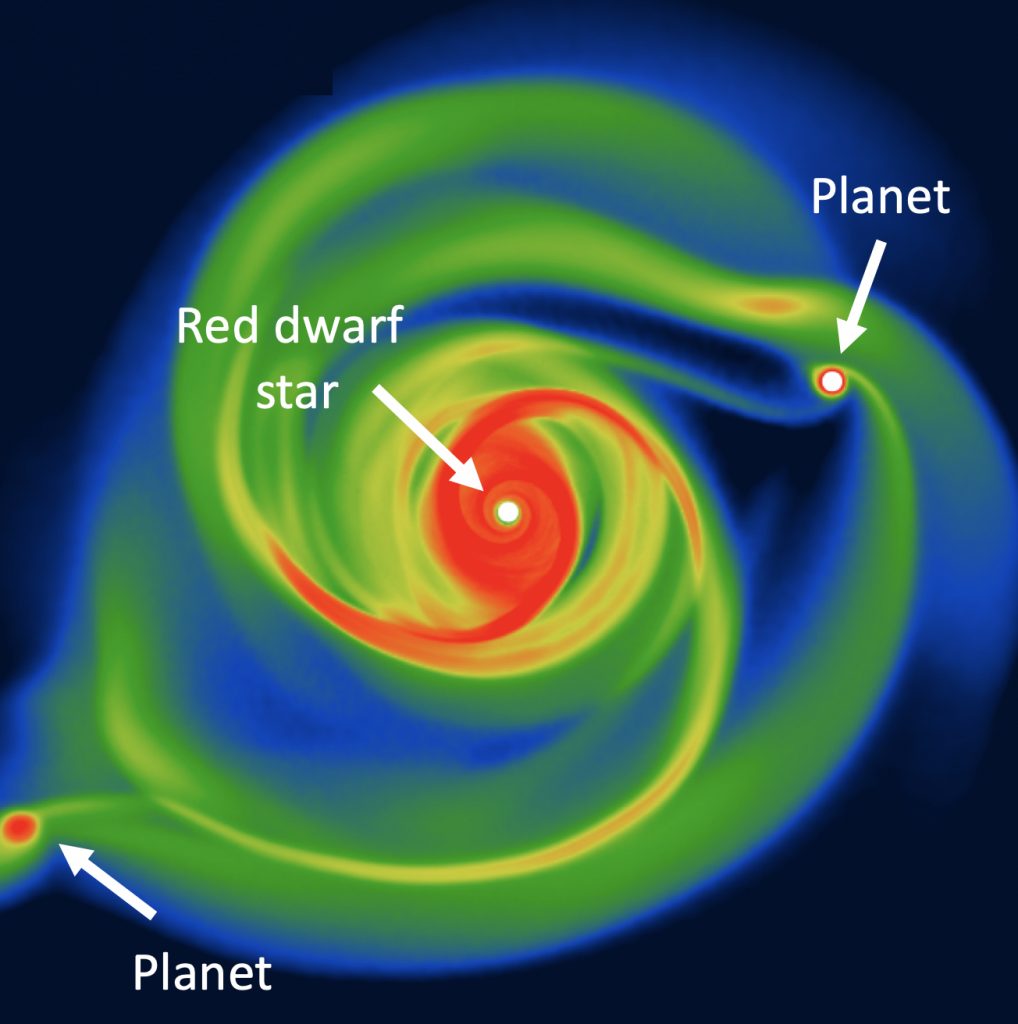 New astronomy research from the University of Central Lancashire (UCLan) suggests giant planets could form around small stars much faster than previously thought.

Red dwarfs, the most common type of stars in our Galaxy, are small stars, 10% to 50% the size of our Sun.  Despite their small mass, they are found to host giant planets up to 10 times bigger than Jupiter, the largest planet in our Solar System.

The formation mechanism of these big planets remains an unsolved mystery. Giant planets around stars, like our Sun, are thought to have formed by the gradual build-up of dust particles to progressively bigger bodies. However, red dwarfs are tiny when compared to the Sun, and they do not seem to have enough material around them to form such big planets.

The researchers found that if these young discs are big enough they can fragment, i.e. break up into pieces, forming gas giant planets. This theory predicts that the formation of giant planets happens within a few thousand years, a timescale which is extremely fast in astrophysical terms.

Dr Mercer, who led the research, said: “The fact that planets may be able to form on such short timescale around tiny stars is incredibly exciting. Our work shows that planet formation is particularly robust: other worlds can form even around small stars in a variety of ways, and therefore planets may be more diverse than we previously thought.”

The researchers also found these planets are extremely hot when they form, with temperatures at their cores reaching thousands of degrees. Such hot planets would be relatively easy to observe when they are still young. They do not have an internal energy source, so they become fainter with time, and the window of opportunity to directly observe them is very small.  Nevertheless, they can still be indirectly observed by their effect on their host star.  Many planets like these have been discovered so far around small stars.

Co-author of the research Dr Stamatellos, Astrophysicist in UCLan’s Jeremiah Horrocks Institute, added: “This was the first time that we were able not only to see planets forming in computer simulations but also to determine their initial properties with great detail. It was fascinating to find that these planets are of the ‘fast and furious’ kind – they form quickly and they are unexpectedly hot.”

Future observations of planets around very young red dwarf stars will test the predictions of this new theory.

The research was funded by a PhD studentship from the Science and Technologies Facilities Council (STFC).

Computer simulation of planets forming in a protoplanetary disc around a red dwarf star.

Animations
A high resolution animation can be downloaded at http://www.star.uclan.ac.uk/~dstamatellos/downloads/movies/mdwarfs.mp4

A related YouTube animation can be found at https://youtu.be/YuhqebYwQis

Simulations were performed using the UK’s DiRAC High Performance Computing facility. The research was funded by a PhD studentship from the Science and Technologies Facilities Council (STFC).