Director of Jeremiah Horrocks Institute of Maths, Physics and Astronomy, Head of School of PSC. Email: dward-thompson at uclan.ac.uk

I was part of the team that recently took the first ever picture of a black hole. See a video of my public lecture on this topic here:

News bulletin interviews with Sky & the BBC about the black hole picture. 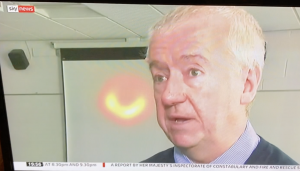 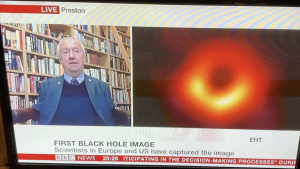 I was President
of the UK Society for Popular Astronomy.

Click here to find out more about the SPA.
To see my July 2013
lecture to the SPA about the latest results on star formation
from the Herschel Space Observatory

I am a member of the Herschel SPIRE Consortium, which recently won the
RAS Group Achievement Award in Astronomy for 2014.

I wrote a text-book on An Introduction to Star Formation in 2011 with my
colleague, Professor Anthony Whitworth of Cardiff University.
This book is aimed at final year under-graduate students and was
published by Cambridge University Press.

I ran the Great North Run in 2013.
Click here to see some pictures.

I am the Head of School of Physical Sciences and Computing,
which contains about 80 academic staff, and over 1600 FTE
under-graduate students.

I obtained my first degree from Oxford University in 1983 and my PhD from Durham University in 1987. I
worked at Lancashire Polytechnic for 3 years and carried out post-doctoral research at Cambridge
University for 3 years. I was a senior research fellow at the Royal Observatory, Edinburgh, for 5 years,
before I was appointed to a lectureship in Cardiff University in 1998. I was awarded a personal chair by
Cardiff University in 2007, and promoted to Deputy Head of School in 2010. I was made Director of the JHI
in July 2012. I currently lead a research group in Observational Star Formation, which has both
post-doctoral and post-graduate members, partly funded through a consolidated grant from STFC.

My research interests lie in the field of the formation of stars and planets. In particular I am
interested in the very earliest stages of star formation. I co-authored the seminal discovery paper of
Class 0 protostars, and I also identified the even earlier evolutionary stage known as pre-stellar cores.
I have appeared on the BBC ‘Sky at night’ programme on six occasions, and the Radio 4 ‘Today’ programme
once, talking about my research. I have published over 200 papers in total, including over 150 refereed
publications, which have received over 7000 citations between them.

I have taught a 2nd-yr course in ‘Observational Techniques in Astronomy’ and was responsible for the
2nd, 3rd & 4th year Astronomy Teaching Laboratories and Telescopes at Cardiff University. I have
previously demonstrated in the 1st year Computing Laboratory and in the 1st year Physics Laboratory. I
have also previously taught a 4th-year course on Spectroscopy. I gave 1st and 2nd year tutorials and
supervised 3rd and 4th year undergraduate projects. I also teach a number of post-graduate PhD students
at any one time.

I currently supervise a post-doctoral research assistant. I was the PI of the THUMPER 200-micron
camera and supervised the team which built it. I have previously supervised the astronomy research
computer management. I supervise 2-4 PhD students at any one time.

I was awarded a visiting Professorship of the Centre National de la Recherche Scientifique (CNRS),
France, for academic year 2005/6, held jointly at the Observatoire de Bordeaux and Centre d Etudes
Nucleaires de Saclay. I also spent a Sabbatical Summer Research Associateship at the University of
Illinois in 1997. I have been invited to give papers at many international conferences, including
Protostars and Planets V in Kona in 2005, and the International Astronomical Union (IAU) Symposium on
Star formation at high angular resolution in Sydney in 2003. I have written a number of invited review
papers for various publications, including for Science in 2002, and for The ISO Science Legacy in
2005.