The Jeremiah Horrocks Institute is located at;

Travelling to and from Preston is surprisingly easy since the town is a major focus of rail and road networks. The M6 motorway links Preston with the rest of the country and the M61 and M62 provide quick access to Manchester and Yorkshire. International airports at Manchester and Liverpool serve the north-west, while Ireland and the Isle of Man are easily reached by air from Blackpool or by cross-channel coach services or ferry from Heysham, Liverpool, Fleetwood and Holyhead.

The campus is conveniently located within walking distance of Preston city centre. Bus routes run past many of the campus buildings.

Preston is on the UK’s West Coast main line major inter-city rail route, linking Greater London, the West Midlands, the North West, North Wales and the Central Belt of Scotland. The JHI is only a 15 minute walk from Preston’s rail station, and trains travelling on the West Coast main line arrive and depart there very regularly.

Leave the M6 at Junction 32 (M55) and take Exit 1 (A6) to Preston/Garstang. Turn left from the slipway onto the A6 to Preston and proceed through five major road junctions with traffic lights. Immediately after the fifth set of traffic lights, take the right hand lane and bear right at the next set of lights into Moor Lane. (There is a right filter in operation at these traffic lights). You will be following the signs for Liverpool. The University is also signposted along the route.

At the end of Moor Lane is a large roundabout. The University (Foster Building) is situated on the right hand side of the roundabout.

Leave the M6 at Junction 31. Turn left from the slip road onto the A59 towards Preston. The Tickled Trout Hotel will be on your right hand side. Proceed to the first roundabout bearing left to follow the signs for Preston Town Centre to New Hall Lane. The University is signposted along the route. New Hall Lane ends in a T junction with traffic lights. Turn right and proceed to the first traffic lights at the ringroad. Go straight ahead onto the dual carriageway. Approaching the next set of traffic lights take the second lane from the right in order to be in the correct lane to enter Walker Street. The Holiday Inn is on the left hand side.

Turn right at these lights and then immediately left into Walker Street. Proceed to the end of Walker Street at the junction with a large roundabout. The University of Central Lancashire will be facing you as you enter this roundabout.

The Institute is based in Maudlaund and Leighton Buildings, on the main Preston city centre campus. These are marked MB and LE in the blue zone on the below campus map (click to enlarge)

Entrance to the Leighton and Maudland Buildings is via the Foster Building, marked FB in the blue zone on the campus map. 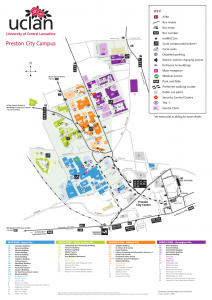