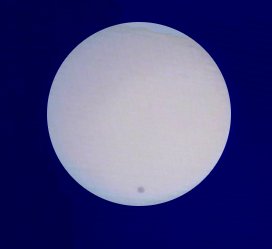 When Venus passes in a direct line between the Earth and the Sun, it is said to transit the Sun. A transit is visible as a black dot on the face of the Sun. The size of the dot is caused by the relative distances and sizes of Venus and the Sun. By accurately timing the start and end point of a transit from a number of different locations on the Earth, it is theoretically possible to calculate the scale of the Solar System. This is possible by triangulating between the different observing locations and knowing accurately their distances apart.

The image to the right was taken with a broad-band filter, and shows the 2004 Venus transit. Venus can be seen as a black circle against the disc of the Sun. The image was projected onto a screen using a small telescope and a picture taken of the screen (Image credit: D.Ward-Thompson).

The first known observation of a transit was carried out by Jeremiah Horrocks, at Much Hoole near Preston in 1639. It is for him that the Jeremiah Horrocks Institute at UCLan is named. A painting of Jeremiah Horrocks observing the transit of Venus in 1639 is shown to the right. Note how he is observing safely, by projecting an image of the Sun onto a screen.

Subsequent transits were observed from various locations, and expeditions were dispatched to make observations as far apart as possible. The transit of 1761 was observed by Charles Mason and Jeremiah Dixon at the Cape of Good Hope, before they went on to survey parts of North America.

The 1769 transit was observed by scientists on Captain Cook’s first voyage, from Tahiti in the Pacific. However, all of the measurements were thwarted by something called the black drop effect. This is an optical effect caused by smearing of the image by the Earth’s atmosphere, which makes it impossible to determine the exact moment at which the edge of the disc of Venus exactly touches 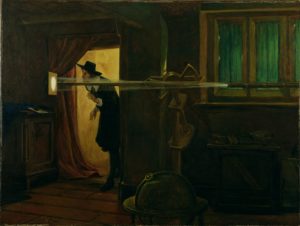 the edge of the Sun’s disc. Modern astronomers use more sophisticated methods to determine distances within the Solar System. Nevertheless, it is still a fascinating astronomical spectacle.

The 2012 transit will take place on 5-6th June. Unfortunately, it will not be well placed for observers in the UK. When the Sun rises on June 6th the transit will already be well underway, and in fact will come to an end not long after sunrise, depending on the exact observing location in the UK. For example, in Preston on June 6th the Sun will rise at 04.43 BST, the edge of Venus will reach the edge of the Sun’s disc at 05.37 BST, and the whole transit will end at 05.54 BST. So UK astronomers wishing to observe the event will have to get up early, or wait until 2117 for the next opportunity to see it. Some UCLan astronomers are travelling to Hawaii to witness the event in full.

Right: an image taken of the 2004 Venus transit, using a narrow-band Hydrogen-alpha filter. This only allows light of a very specific wavelength through to the camera, allowing safe viewing of the Sun. Venus can be seen as a small dark circle against the orange disc of the Sun (Image credit: R.H.Lang). 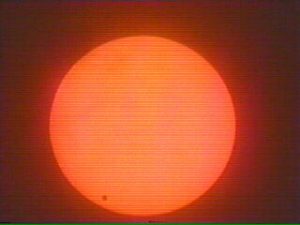 CAUTION: NEVER OBSERVE THE SUN DIRECTLY OR WITH A TELESCOPE UNLESS YOU ARE USING A SPECIALLY MADE SOLAR FILTER. ALWAYS PROJECT THE IMAGE ONTO A SCREEN TO OBSERVE. DO NOT USE DARK GLASSES OR SUN-GLASSES TO OBSERVE THE SUN. OTHERWISE, SERIOUS EYE DAMAGE CAN RESULT.