One of the most fascinating questions in modern day Astronomy is how stars and their planetary systems form. In the last couple of decades a large number of exoplanets have been discovered around distant stars, providing important clues about the planet formation process.

This project aims at understanding how planet formation happens in the discs of gas and dust around young stars. Two main theories have been proposed to explain the formation of gas giant planets: (i) core accretion, in which planetary cores form from coagulation of  dust particles into progressively larger bodies, and (ii) disc fragmentation, in which giant planets form directly by the gravitational collapse of massive discs. The PhD candidate will investigate the disc fragmentation theory in young protostellar discs using radiative hydrodynamic simulations that include both gas and dust, so that comparisons can be made with observations from current facilities (e.g. ALMA, VLT). It is expected that the student will develop strong computational skills and he/she will have access to local and national supercomputing facilities. 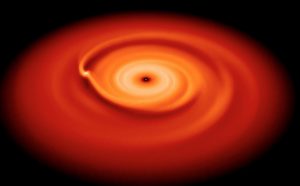