Stars form deep within the cores of cold, dense clouds of interstellar gas and dust. When gravity dominates over turbulent, thermal, and magnetic support, the cores of these clouds collapse to form stars. The masses of these stars range rom a few times the mass of Jupiter, the largest planet in our Solar System, up to a few hundred times the mass of our Sun. Then, after a young star has formed, the left over material around it forms a protoplanetary disc and the formation of a planetary system begins

The observational group uses far infrared and sub-millimeter telescopes together with radiative transfer modelling to determine the properties of prestellar cores, i.e. the initial stages of star formation. The members of the group have used world-leading observing facilities like MERLIN, Herschel, Spitzer, and the JCMT.

The theory group uses hydrodynamic simulations to study the properties of stars forming in collapsing clouds, like for example their mass distribution and their binary properties. The group is particularly interested in the physical processes in protostellar discs that lead to the formation of planets, brown dwarfs and low-mass stars. The group has developed novel computational methods and has used leading supercomputing facilities.

We have been exploring the formation of very low-mass hydrogen-burning stars, brown dwarfs and planets in protostellar discs. This is a critical problem, since it addresses the question of why there is a minimum mass for star formation. We have pioneered the study of gravitational instabilities in large discs around newly-formed stars and have shown that they are likely to play an important role in forming such low-mass objects. Our research has shown that the disc fragmentation model can explain successfully properties that are not satisfactorily explained by other formation mechanisms, for example the mass distribution of low-mass stars, the lack of brown dwarf companions to Sun-like stars (the “brown dwarf desert”), the presence of discs around brown dwarfs, the statistics of low-mass binary systems, and the formation of free-floating (“rogue”) planets. Moreover the model makes predictions that can be tested by observations from current (e.g. Herschel) and future facilities (ALMA, GAIA).

The formation of Gas Giant Exoplanets

A large number of giant exoplanets have been discovered around nearby stars in the last two decades, many of them orbiting at close distances to their parent stars. We have examined whether giant planets can form by gravitational fragmentation of protostellar discs around Sun-like stars. We found that the disc thermodynamics play an important role in this process and do not allow any fragmentation close to the central star. Fragmentation can happen at large distances from the central star, but in this case objects of larger mass form; not planets. Our work suggests that giant planets must form by an alternate method, e.g. by the core accretion scenario, unless a way can be found to stop and/or reverse their mass growth as they evolve in their parental discs.

Smoothed Particle Hydrodynamics is a Lagrangian method which invokes a large array of particles to de- scribe a fluid. We have developed an efficient method to capture the thermal and radiative effects in simulations of star formation. The method uses the density and gravitational potential of each particle to get an estimate of the particle’s optical depth, which in turn regulates the heating and cooling for each particle. The effects of the rotational and vibrational degrees of H2, of H2 dissociation, of H0 ionisation, and the first and second ionisation of helium are included. Moreover the opacity changes due to e.g. ice mantle melting, the sublimation of dust, molecular and H− contributions, are also considered. The method performs very well, both in the optically thin and optically thick regime, and it is relatively easy to implement in particle- and grid-based codes. This method has been successfully applied in a variety of problems (cloud collapse, disc fragmentation, planet formation) and has been used by other star formation groups (e.g. Edinburgh, Bonn, St Andrews, Beijing, Sheffield, UCL).

Computational radiative transfer is the link between theory and observations. We have developed a Monte Carlo radiation transfer code (PHAETHON), which uses a large number of virtual photons to represent the radiation being transported through a physical system. This radiation can be from stars, from diffuse emission, and from the background radiation field. The code solves for the dust temperature and produces observables, i.e. spectral energy distributions and intensity maps at different wavelengths and different viewing angles. It can be used on a variety of dusty systems such as prestellar cores, young protostars, protostellar and protoplanetary discs, circumbinary discs, dusty galaxies, planetary nebulae etc. It can also be applied to other areas outside Astrophysics (e.g. in planetary atmospheres, in medical physics).

The densest infrared dark clouds (IRDCs) may represent the earliest observable stage of high-mass star formation. These clouds are very cold, hence they emit mainly at far-infrared and sub-mm wavelengths. For the first time, Herschel has provided multi-wavelength, spatially resolved observations of cores within IRDCs, which, when combined with radiative transfer modeling, can constrain their properties, such as mass, density profile and dust temperature. We have used our 3D, multi-wavelength Monte Carlo radiative transfer code to model in detail Herschel observations and thereby determine the properties of these cores and compare them with their low-mass equivalents. 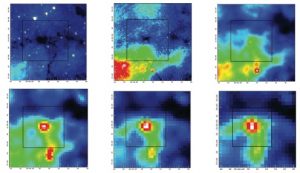 The observational star formation group at the JHI principally work with data taken by instruments working at submillimetre wavelengths in order to study star formation on the smallest scales, investigating the properties of individual filaments and cores. These objects consist largely of cold molecular hydrogen, with temperatures less than 20 Kelvin, whose radiation peaks in the submillimetre regime.

We primarily study molecular clouds within a ring of nearby star-forming regions known as the Gould Belt. The Gould Belt provides a serendipitous ‘laboratory’ for the study of low- to intermediate-mass star formation; it is thought that the clouds in the Belt were formed by the same event, and hence have comparable ages and, on a galactic scale, exist in similar environments. The Gould Belt can thus be considered as a large sample of comparable molecular clouds, existing at a distance small enough that individual filaments and prestellar cores can be resolved.

There have been several recent surveys of nearby star-forming regions by new instruments working in the infrared and the submillimetre. We work with data from two of these: the Herschel Space Telescope and James Clerk Maxwell Telescope (JCMT) Gould Belt Surveys. Between them, these instruments take data at eight wavelengths across the submillimetre regime. The JCMT’s HARP instrument also provides spectral line data for three isotopologues of carbon monoxide, allowing investigation of the kinematics of objects.

Our goal is to use the wealth of information available to investigate the statistical properties of molecular cores in star-forming regions, overcoming the small-number statistics which have dogged previous studies. In particular, we are interested in investigating the origin and nature of the Initial Mass Function