Abstract
In a journey that has stretched from the coastline of Namibia to the steamy jungles of Ghana, across crocodile infested lakes and the deserts of Northern Kenya, the cliff-side dwellings of the Dogon in Mali and onto the mysterious archaeological sites of the Egyptian Sahara, this lecture explores Africa’s ancient astronomical history. By shedding new light on traditional African astronomy, and in turn global understanding of the world’s oldest science, acclaimed African astronomer, Dr Thebe Medupe of the South African Astronomical Observatory, will look at celestial beliefs from different parts of the African continent and how some of these ancient African perceptions link with current scientific knowledge.

Professor Thebe Medupe grew up in a poor South African village near Mafikeng, about four hours north-west of Johannesburg. He went on to gain a doctorate in astrophysics at the University of Cape Town, and was presenter and associate producer of “Cosmic Africa”, a feature documentary about traditional African astronomy released in 2002. He is a researcher at the South African Astronomical Observatory, where he is participating in a programme to encourage black South Africans to take up astronomy. He is writing a book, in the Setswana language, on ethno-astronomy”.

Please register for your free tickets via Eventbrite using the link below.

Simplicity, elegance and beauty have long played an important role in the development of theoretical physics. Such considerations have not only deepened our understanding, but have in many instances led to concrete predictions which were verified by experiments. A central theme is the unification of the laws of fundamental physics, a program which has culminated in String Theory in recent years. After an historical overview enriched by examples, I will discuss the motivations for String Theory, its status, and its role in modern theoretical physics.

Andreas Braun is an Assistant Professor at the Department of Mathematics, Durham University. Prior to moving to Durham, he has held research positions in Vienna, Tokyo, London and Oxford. His research is concerned with geometrical aspects of theoretical physics, in particular string theory, and crosses the boundaries between theoretical physics and ma

The Jeremiah Horrocks Lecture -May 2019

How to take a picture of a black hole

A black hole is an extreme region of space that contains so much matter in such a small region that it curves the very essence of space itself. The speed needed to escape from a black hole is greater than the speed of light, so once something has fallen into a black hole it can never get out, because nothing travels faster than light.

This talk will describe how, for the first time ever, we took an actual picture of a black hole – something that was thought to be in the realms of science fiction only a few years ago. This is because a black hole doesn’t emit any light or reflect any light.

But now the event horizon around a black hole has been imaged – the last place from which light can escape. This was made possible by connecting together 8 different telescopes across the earth to make the equivalent of one single earth-sized telescope. It is so powerful that it could resolve an object only a few centimetres across on the surface of the Moon.

The black hole imaged is the size of our entire solar system – except that it is 55 million light years away. One of the 8 telescopes is the James Clerk Maxwell Telescope in Hawaii, which is part-owned by the University of Central Lancashire, and Professor Derek Ward-Thompson has worked on the imaging team to make the picture.

On July 20th 1969, one of the greatest feats ever achieved by the human race was accomplished, as Neil Armstrong and Buzz Aldrin stepped onto the Moon. By doing so they became the first humans to walk on a celestial body other than planet Earth.

To mark the 50th Anniversary of this incredible event, the JHI is showcasing a celebratory evening in which you are invited to experience (or relive for those old enough to remember) the sights and times of those days as well as other things “moon related”.

At the centre of the evening is the show “Rocket to the Moon”, in which Dr Kevin Bowman explains what it was like to live through those exciting times. As the race to the moon is brought to life, you will meet the mighty Saturn V rocket, as you become an Apollo astronaut and embark on your own epic voyage to land on the moon. See the experience unfold before you on a giant two storey screen and full surround sound.

Both before and after “Rocket to the Moon” you can visit The Showcase area where light refreshments will be served and a host of displays and activities will be on show. During this time there is the opportunity to do the following:

• See a huge 1/24 scale Apollo-Saturn V model which is over 5 metres tall when stacked. It is made entirely from paper, making it the largest paper model of the Apollo-Saturn V in the world.

• Try a computer simulation landing on the moon using the same method as used on the Apollo missions.

Our place in the Universe

We will explain the concept of the expanding universe – what exactly is expanding? – and the modern evidence for it. This will reveal a number of unexpected connections between the size and age of the universe and the conditions needed for life to exist and persist within it. We will meet the idea that an inflationary surge in expansion rate of the universe occurred in the distant past and see the powerful evidence that this happened. This will provoke us to take seriously the idea that we are part of a multiverse of universes, each with different properties, and that our observable universe might have a beginning whilst the multiverse does not. Finally, we will see what the observed acceleration of our universe’s expansion today signals about its far future. It may well be that astronomers in the far future will not be able to study the universe by direct observation like we do today.

John D. Barrow FRS is Professor of Mathematical Sciences at Cambridge University and Director of the Millennium Mathematics Project, a programme to improve the appreciation of mathematics amongst young people and the general public. He is a Fellow, and former vice-president, of Clare Hall, Cambridge. His research interests are in cosmology, astrophysics and gravitation. He has received many awards, including the 2006 Templeton Prize, the Royal Society’s 2008 Faraday Prize, the 2012 Zeeman Medal of the London Mathematical Society, the 2009 Kelvin Medal and the 2015 Dirac Gold Medal of the Institute of Physics, and the 2016 Gold Medal of the Royal Astronomical Society. He is a Fellow of the Royal Society and the Academia Europaea. He has written more than 540 scientific papers, and 22 books translated into 28 languages; including recently, The Book of Universes. His play, Infinities, won the Premi Ubu for best play in the Italian theatre in 2002 and the 2003 Italgas Prize. He was Gresham Professor of Astronomy from 2003-7, and Professor of Geometry, 2008-11. John Barrow also has the curious distinction of having delivered lectures on cosmology at the Venice Film Festival, 10 Downing Street, Windsor Castle and the Vatican Palace.

Abstract: The popular notion of a black hole “sucking in everything” from its surroundings only happens very close to a black hole. Far away, the pull of the black hole is identical to that of anything else of the same mass. However, black holes do give rise to many remarkable phenomena such as extragalactic quasars and, in our own Galaxy, microquasars. This is because gravity is not the only law of physics that must be obeyed. Matter can be spun off from near black holes in the form of winds and jets that spread through their surroundings and thus cause black holes to have tremendous cosmic influence many light years beyond their event horizons. I will describe various approaches that I employ to investigate these phenomena, and their spin-offs.

Katherine Blundell is a Professor of Astrophysics at the University of Oxford and a Research Fellow at St John’s College.
To book tickets please go to:

Discover the wonders of space with this series of public lectures on astronomy to celebrate UCLAN’s 190th Anniversary.

Exoplanets: Exploring the diversity of worlds in our Galaxy

Professor Richard Nelson will describe the methods used by astronomers to discover exoplanets, what we know about the exoplanet population and how our ideas about planetary system formation have evolved in recent years.

Is the Milky Way special?

In this talk, Chris Lintott will draw on cutting-edge research and results from his own Galaxy Zoo project to compare the Milky Way to the other galaxies which surround us, and ask whether we’re living in a special time in its history.

Everything from nothing: how our universe was made

Cosmology confronts some of the most fundamental questions in science. How and when did our universe begin? What is it made of? How did galaxies and other structures form? There has been enormous progress in the past few decades towards answering these questions.

The Antikythera Mechanism: The oldest computer

In the talk, it will be discussed how humans conceived such a mechanism and how they managed to construct a mechanical cosmos based on causality, the notion of laws of physics, and modelling.

From Pendle Hill to the Stars: Four centuries of Lancashire astronomical history from Jeremiah Horrocks to UCLan

Lancashire has an extremely rich and distinguished astronomical history, from men who first advanced the work of Kepler and Galileo to cutting-edge modern astrophysics. Astronomical societies of international importance have flourished in the county since 1881, including that of Preston, which not only advanced original observational work but also pioneered astronomical public education and outreach.

Location: Foster Building Lecture Theatre 2, University of Central Lancashire, Preston, Lancashire, PR1 2HE
Solar energy based on a silicon solar cell was first pioneered in the 1950’s. In the intervening decades the technology has evolved into numerous types of different solar cells based on a myriad of different materials. Despite this Silicon solar cells still represent around 95% of worldwide solar modules sold despite key inherent limitations. This talk will look at the key considerations for the design of photovoltaic panels, what are the current alternatives to Silicon, what are the strengths and weaknesses of the various technologies, what will the future hold for solar energy and can it ever truly compete with fossil fuels.

Comets, Asteroids and Impacts. Should we worry and what can we do? 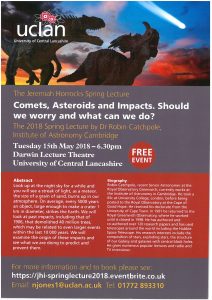 For more information and to book please see:

The Extremely Large Telescope (ELT) is a future ground-based optical and infrared telescope, which is being designed and built by the European Southern Observatory. With a primary mirror diameter of 39m, it will be the largest optical-infrared telescope in the world when it enters operation in the middle of the next decade. Construction work is underway at the telescope site in Chile. In this talk, I will discuss some highlights from the science case for the ELT, which ranges from studies of exo-planets to the most distant galaxies and cosmology. I will also describe the telescope design and plans for the instrumentation suite. Finally, I will discuss the current status of the project.