Over the past few years, manufacturers have stopped making high-tech items such as phones from plastic and instead started using materials such as glass and metal and even sapphire. These materials have become available for use because of improvements in the processes by which they are made. These materials are better than plastics in their feel, strength and transparency, but there are many more properties of materials we can in principle optimise: their solar power generation, their thermal and electrical conductivity, superconductivity and magnetic behaviour are just some examples. At UCLan, we are pioneering the idea of designing materials to have specific properties inside a computer and then going out and making them in the lab to test in the real world.

High quality single crystals are essential for fundamental research and for numerous technological applications. Ultraclean samples of novel materials hold the key to scientific breakthroughs in the field of condensed matter physics. Furthermore, many materials of interest show anisotropic behaviour, either as a result of their crystal structure and interactions or as a consequence of the application of magnetic fields or pressure. The underlying physics of such systems can only be unravelled by investigations on high quality crystals. Therefore, single crystal growth is of strategic importance for the solid state research. Here, at UCLan, we are developing crystal growth facilities in order to satisfy both in-house and external demand for single crystals of a very wide range of materials.

Graphene is a one-atom-thick sheet of carbon. It’s the first material that can be made in one-atom-thick sheets. It is nearly completely transparent, very flexible and very conductive, both electrically and thermally. In principle, by cutting the sheet down to a particular shape, or even by just punching a regular pattern of holes in it, one can tailor its electronic properties so that it is a different colour, or has different conductivity or transparency. It is this aspect that we are interested in at UCLan.

Ionic liquids (ILs) consist of ions held together by a strong Coulomb potential and can remain liquid up to around 400 K. The combination of cations and anions can be tuned to create ILs with desired properties. ILs are being investigated for applications such as gas capture, catalysis, lubrication and electrolyte in batteries and photovoltaic devices. ILs have very low vapour pressures and as a result can be studied in ultra-high vacuum (UHV) conditions. This allows us to investigate the interactions of ILs at surfaces and interfaces using UHV surface science techniques.

Nano-structured magnetic materials are of fundamental importance for a wide range of devices and applications, including magnetic memory, logic and sensors. For spintronics applications, magnetic materials allow the utilization of the electron’s spin degree of freedom, in addition to its charge, in order to provide advanced functionality, resulting in non-volatile and fast memories, with drastically reduced power consumption compared to standard semiconductor-based devices. Furthermore, hybrid spintronics/magneto-electric devices allow for electrical control of magnetism, which is currently of great interest for fundamental studies as well as technological applications due to its huge versatility.

At UCLan we are investigating the rich properties of nano-structured magnetic and magneto-electric materials, using a range of advanced characterization techniques as well as advanced micromagnetics computations using our in-house developed software Boris. In addition, we collaborate closely with the Nano-biomaterials Research Group on projects involving the fabrication and characterisation of magnetic nanoparticles for potential applications in separation science, drug delivery, industrial catalysis and bio-sensors.

Magnetic Materials Research has a long tradition at UCLan. Originally focused on applied magnetism (data storage) and interactions between fine magnetic particles, members of the group have recently extended their interests into the areas of (i) Multiferroics and (ii) super-paramagnetic nano-particles. For (i), a collaboration with the UK’s National Physical Laboratory has led to a new PhD project that has just started to investigate the anisotropy of multiferroic composites and the effects of texture on the converse Magneto-Electrical effect. For (ii), nano-composites have been developed with a view to their use in bio-catalysis and drug delivery. In addition, the group takes part in work led by the surface patterning group on a joint project between Fudan University, Shanghai, China and Feedwater Ltd. UK on Multifunctional Nanocomposites for the Separation of Pollutants from Industrial and Municipal Sewage Water

Research in magnetic materials is currently focussed on two themes:

The Magnetic Materials Research Laboratory provides facilities for the measurement and characterisation of various magnetic materials. In addition to conventional Vibrating Sample Magnetometry (VSM), the lab also has more specialist Vector VSM and Transverse Susceptibility instruments. Other expertise consists of Scanning Column Magnetometry for the study of ferro-fluids and other dispersions of magnetic particles and in noise measurements as a function of magnetic state; the later having been used as a probe for the interactions and structure within magnetic data storage media. Recently, we have extended our capability in biomedical nanoparticle research by the addition of a Magnetic Hyperthermia rig.

The idea behind nanoscience is that we ought to be able to put every atom in the right place, rather than, as we do currently, push great big piles of them around until the overall pattern is close enough to work. Even the smallest transistor in the newest computer is still tens of times bigger than it would be if we could put every atom in the right place. At UCLan, we have microscopes capable of imaging individual atoms and molecules – and pushing them around. We use these advanced facilities to explore the underlying physics related to technologies such as computers, solar cells and catalysis. 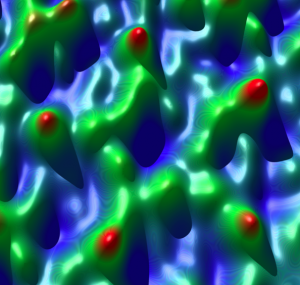 Strongly correlated electron systems belong to the most intriguing and versatile materials. In these systems, competing interactions in charge, spin, orbital, and lattice degrees of freedom lead to the emergence of a multitude of exotic states, including unconventional superconductivity and magnetism, valence fluctuations, heavy fermions, phases with charge stripes or a pseudogap. At UCLan, we are interested in how subtle changes in material composition, pressure or magnetic field may tip the balance between the competing tendencies, resulting in complex phase diagrams.