Research into fast magnetization dynamics [1] has seen a growing interest due to both the exciting physics involved and its application to spintronics devices, including magnetic memory devices and multiferroic tunnel junctions [2]. The ability to control and tune the magnetization switching processes is expected to result in a new generation of advanced spintronics devices and open a rich avenue of research. This project will investigate exactly this possibility, using a novel method for controlling magnetization precession damping in multiferroic devices.

In magnetic materials damping of magnetization precession occurs due to energy transfer processes from the spin system to the lattice and it is an essential mechanism which determines the speed of magnetization switching in magnetic materials and spintronics devices [3]. Damping is commonly described using an isotropic scalar, α, the Gilbert damping parameter, within the Landau-Lifschitz-Gilbert description of magnetization dynamics. Theoretical investigations have shown that α is generally an anisotropic temperature-dependent tensor, supported by recent experimental evidence, although currently limited. In multiferroic structures, such as multiferroic tunnel junctions, by modifying the periodic lattice potential through voltage-dependent strain coupling [4] between a ferroelectric and ferromagnetic layer, the spin-orbit interaction which couples the spin to the lattice potential should result in a controllable modification of the anisotropy of magnetization damping.

You will study this theme using a number of techniques, including low-temperature ferromagnetic resonance (FMR), low-temperature time-resolved pump-probe MOKE, biaxial VSM with direct and inverse magneto-electric measurements capabilities, SEM, TEM, SPM techniques including AFM, MFM, PFM. The results obtained here will be analysed using a specially modified version of the micromagnetics software Boris, developed by Serban Lepadatu, to take into account the ellipticity of precessional orbits in order to reproduce the anisotropic FMR response.

The project is fully funded for UK and EU students holding or expecting good undergraduate/postgraduate degrees in Physics, Chemistry or related subjects. 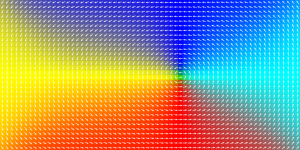