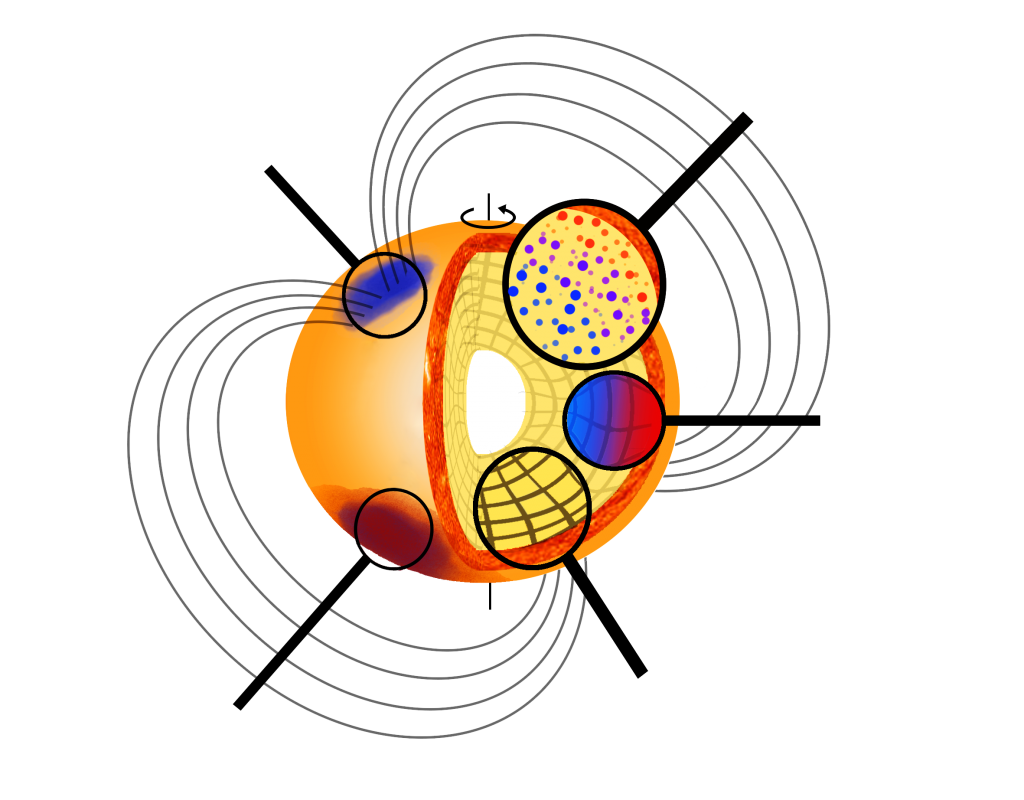 Among the 32 thousand stars observed in short cadence in the first 2 months of science operations, asteroseismic data from the TESS space mission revealed 5 rare roAp stars, including the fastest pulsator in this class.

5th of June 2019 – Using asteroseismic techniques, an international team searched for  pulsations in a subsample of five thousand stars, from the 32 thousand observed in short cadence in the first two sectors (roughly the first two months of science operations) of NASA‘s Transiting Exoplanet Survey Satellite (TESS), and found five rare rapidly oscillating Ap (roAp) stars. These results were accepted for publication in the journal Monthly Notices of the Royal Astronomical Society.

Among the stellar data, the team found the fastest known roAp pulsator, which completes one pulsation every 4.7 minutes. Two of these five stars were found to be particularly challenging to the currently understanding of the field, one because it is cooler than theoretically expected for a roAp star and the other because it exhibits pulsation frequencies that are unexpectedly high.

First author Margarida Cunha (Instituto de Astrofísica e Ciências do Espaço – IA & Universidade do Porto), explains the importance of studying these stars: “The TESS data shows that less than 1% of all A-type stars are likely to be rapidly oscillating Ap stars. Yet, the discovery of these rare pulsators can contribute greatly to the correct modelling of stellar evolution, because roAp stars are unique testbeds for the modelling of the physical processes responsible for chemical element segregation, such as atomic diffusion and radiative levitation.”

Following an in-depth analysis of 80 stars previously known to be chemically peculiar, the team also found 27 new rotational Ap variables, and derived their rotation periods, based on brightness changes during the star’s rotation, produced by passing chemical spots.

To Daniel Holdsworth, from the Jeremiah Horrocks Institute of the University of Central Lancashire), these TESS observations: “are allowing us to study this rare type of pulsating star in a homogeneous way. This allows us to compare one star to another without having to treat the data in a special way. Furthermore, the full-sky nature of the TESS observations will enable us to discover many new roAp stars, and Ap stars which do not pulsate, allowing us to test and refine start-of-the-art theoretical models of pulsations in Ap stars.”

For seven roAp stars, previously known from ground-based observations, high-precision photometric data was also gathered. For four of these stars, it was possible to set constraints on the star’s inclination angle and magnetic obliquity. Margarida Cunha, a member of the steering committee of the TESS Asteroseismic Science Consortium (TASC) adds: “The correct modelling of these physical processes is amongst the most challenging goals faced in stellar evolution research. The discovery of new roAp stars by TESS, as well as the exquisite new data the satellite is providing on roAp stars previously discovered from the ground, will be key to achieving this goal.”

Victoria Antoci, from the Stellar Astrophysics Centre at Aarhus University, explains: “It is exciting that we now have more bright roAp and Ap stars that we can follow-up from ground with small and middle-sized telescopes, which are easier to access. To fully understand the physics in these stars, it is important not only to measure their light variations but also to determine their magnetic fields as well as the chemical composition in their outer atmospheres. These stars have very strong magnetic fields, up to 25 kilogauss. This is about 250 times stronger than a fridge magnet that is of the order of 100 gauss.”

These new results were only made possible because the TESS satellite is continuously observing the stars for periods of at least 27 days, outside the interference of the Earth’s atmosphere, something ground-based observatories cannot achieve.