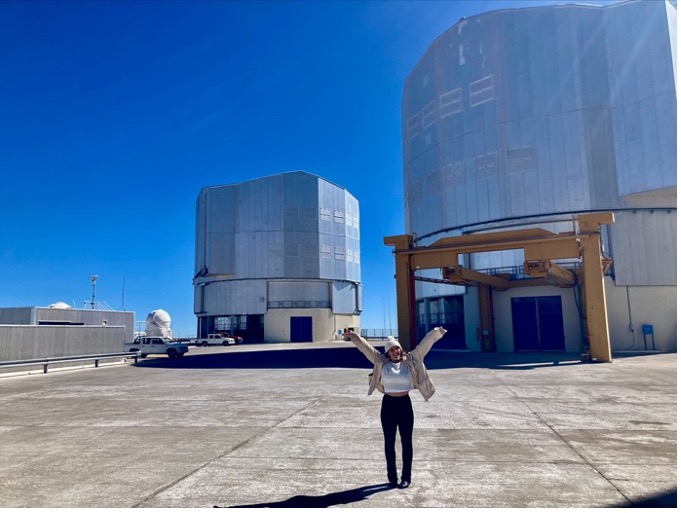 Ph.D. student Alexia has recently returned from a two-month JHI-funded research trip in Chile. She spent most of her time working on her research of large-scale structures in the field of Cosmology at the Universidad de Chile, Santiago, under the supervision of Professor Luis Campusano.

During her trip, she also travelled to Antofagasta, home to Paranal Observatory, the Very Large Telescope (VLT), and the soon to be completed Extremely Large Telescope (ELT) in the Atacama Desert (the driest place on the earth!). In addition, Alexia spent four nights working with European Southern Observatory (ESO) Support Astronomer Dr. Joseph Anderson in the Paranal Observatory control room. There she shadowed and experienced professional observing nights contributing to the incredible work of the international astronomical community. Alexia also contributed to a project with Dr. Anderson investigating the time usage of the FORS2 instrument installed on UT1 (Antu) of the VLT.

Alexia delivered two research talks towards the end of her trip, presenting her first MNRAS published paper: “A Giant Arc on the Sky” at the astrophysics department and the Physics department at the Universidad de Chile.