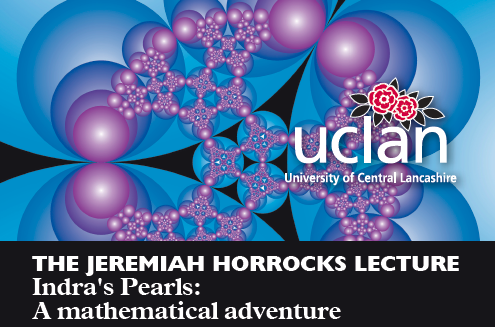 Update (16/3/2020): With the growing number of cases of coronavirus in the UK, we have decided to cancel the above event on the 19th March 2020.  We apologise for the inconvenience this may cause, but we hope you appreciate the University is doing everything it can to minimise the risk of the virus on any of our campuses. We hope to re-arrange the events in the coming months and will be back in touch with you once a new date is confirmed.

This talk is based on the book of the same title by David Mumford, Caroline Series and David Wright. It tells the story of the authors’ computer explorations of some simple but repeated operations on complex numbers, whose interactions produce delicate and beautiful fractals. We will explain the simple geometry and algorithms which generate the pictures, behind which lies a wealth of mathematical meaning. Some of the discoveries explained in the book feed into current research. More pictures and software for generating your own designs can be found on the web.

Caroline Series FRS is Emeritus Professor of Mathematics at the University of Warwick. For the last two years she has been President of the London Mathematical Society, her term ending in November 2019. Following her first degree at Somerville College, Oxford, Caroline won a Kennedy Scholarship to Harvard to do her Ph.D. After postdocs in Berkeley, California and Cambridge UK, she moved to Warwick where she has spent most of her career. She started research in dynamical systems and chaos, and subsequently moved into the study of non-euclidean or hyperbolic geometry, which is very important both in dynamics and also in three dimensional topology. A flavour of her work can be gained from her widely praised book Indra’s Pearls, coauthored by D. Mumford and D. Wright, republished in paperback by Cambridge University Press in 2015.

Professor Series was elected to the Royal Society in 2016. She has served the mathematical community on many committees both national and international, and was a member of both the RAE and REF maths panels. She has given many distinguished public lectures. Throughout her career she has taken a leading role in encouraging women mathematicians. She was a founder member of European Women in Mathematics and was the first vice-chair of the recently formed International Committee for Women in Mathematics.