The discovery of a giant, almost symmetrical arc of galaxies more than 9.2 billion light years away has thrown into question some of the basic assumptions about the Universe.

Known as the Giant Arc, spanning 3.3 billion light years and located in the constellation of Boötes the Herdsman, its discovery, combined with other large structures that have been discovered in recent years, changes our idea of what an “average” bit of space looks like.

PhD student Alexia Lopez and adviser Roger Clowes, from the Jeremiah Horrocks Institute at the University of Central Lancashire (UCLan), together with collaborator Gerard Williger from the University of Louisville, USA, have made the discovery by looking at absorption lines in the spectra towards quasars from the Sloan Digital Sky Survey (SDSS).

Alexia said: “The growing number of large-scale structures over the size limit of what is considered theoretically viable is becoming harder to ignore. According to cosmologists, the current theoretical limit is calculated to be 1.2 billion light years, which makes the Giant Arc almost three times larger. Can the standard model of cosmology account for these huge structures in the Universe as just rare flukes, or is there more to it than that?”

The Giant Arc, which is approximately 1/15th the radius of the observable universe, shows as an enormous, nearly symmetrical, crescent of galaxies in the remote Universe. It is twice the size of the striking Sloan Great Wall of galaxies and clusters that is seen in the nearby Universe. This new discovery of the Giant Arc adds to an accumulating set of cautious challenges to the Cosmological Principle.

In cosmology, we expect matter to be evenly distributed across the observable space when scientists view the Universe on a large scale so there should be no noticeable irregularities. This is based on the principle that the part of the Universe we can see is viewed as a “fair sample” of what we expect the rest of the Universe to be like. This is known as the Cosmological Principle.

The discovery of the Giant Arc adds to the number of structures on scales larger than those thought to be “smooth” and therefore pushes the boundary size for the Cosmological Principle.

The researchers made the discovery by observing the intervening Magnesium (Mg) II absorption systems backlit by quasars, which are remote super-luminous galaxies that emit extraordinary amounts of energy and light.

Alexia added: “A quasar acts like a giant lamp shining a spotlight through other galaxies, with the light eventually reaching us here on Earth.

“We can use telescopes to measure the spectra of these quasars, which essentially tells us the journey that the quasar light has been through, and in particular where the light has been absorbed. We can locate where the quasar light has passed through galaxies by a signature Mg II doublet feature, which is a distinctive pair of absorption lines in the spectra. From this easily identified absorption ‘fingerprint’, we can map low luminosity matter that would usually go unseen due to its faint light emitted in comparison to the quasars.

“When viewed on such a large scale, we expect to see a statistically smooth distribution of matter across the Universe, based on the Cosmological Principle introduced by Einstein to make the maths easier, that the Universe is isotropic and homogeneous. It means that the night sky, when viewed on a sufficiently large scale, should look the same, regardless of the observers’ locations or the directions in which they are looking.

“We are seeing the Giant Arc now, but in reality, the data we’re looking at show the Universe as it was half its lifetime ago because the light has been en route, travelling towards, us for billions of years. It was so long ago that the Universe at the time was about 1.8 times smaller than it is now.”

Alexia Lopez has presented her work on the Giant Arc at the 238thvirtual meeting of the American Astronomical Society, 7-9 June. 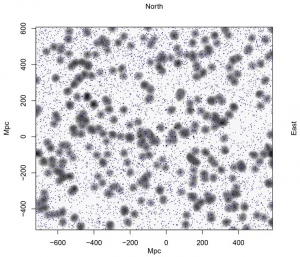